73 Climate Schools present their work for climate protection in Athens

The art and environemntal works of 73 primary and secondary school students were presented during the second open event of the “OPEN SOCIETIES AND SCHOOLS IN CLIMATE PROTECTION AND ENERGY TRANSITION (CLIMATE SCHOOL Be.At)” project on 16-17 of May, 2019, at “Technopolis” of the Municipality of Athens. The project was implemented jointly by the Municipality of Athens and the Social Co-operative “Wind of Renewal“, the German citizens’ initiative “Respect for Greece” (RfG) and the German “Independent Institute of Environmental Issues” (UfU). 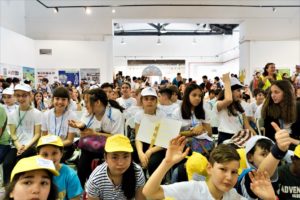 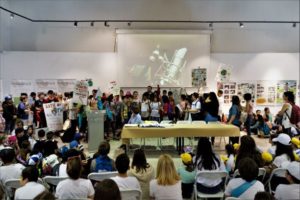 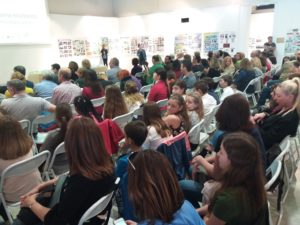 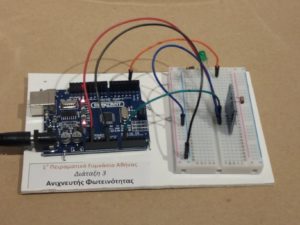 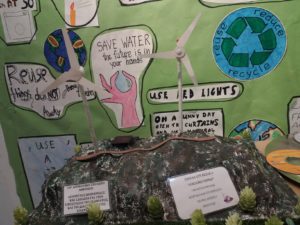 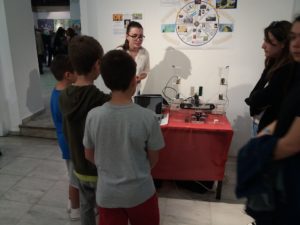 The event was inaugurated by the Mayor of the City of Athens, Giorgos Broulias. The mayor referred to the project and other related actions of the Municipality for climate change. 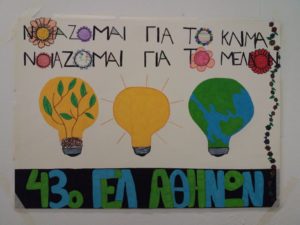 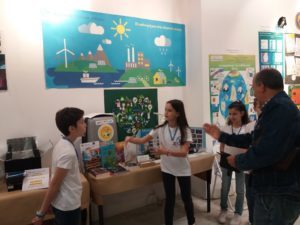 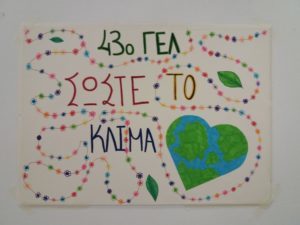 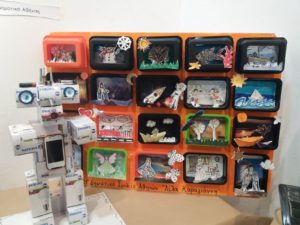 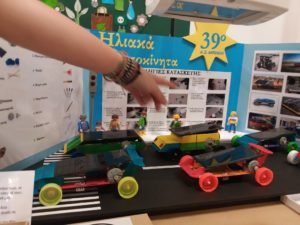 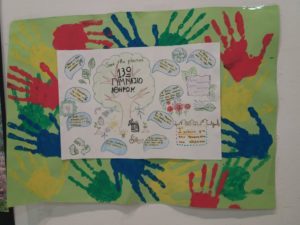 Maria Iliopoulou vice-Mayor for the child, presented the actions implemented in the schools. Maria Iliopoulou mentioned that the program is part of the general action of the City of Athens in the framework of its commitment to adapt to climate change and save energy in school buildings. Furthermore, an extended research project was carried out under the authority of the Institute for Educational Policy and until the finalisation of the project a comprehensive action plan for climate protection and energy saving for the school buildings of the municipality will be delivered to the new munic-ipal authority of the city of Athens.

The vice-Mayor responsible for the environment Eleni Myrivili stressed the fact that cities are playing a crucial role in climate change and can be pioneers in this effort.

The regional director of education in Attica, Giorgos Kosivas, noted that climate change is one of the major threats humanity faces and must be tackled now and not sometime in the future. We must take action and protect the environment with the cooperation of citizens, governments and other organisations.

The director of primary education of Athens, Anastasis Papageorgiou was represented by Maria Dimopoulou, responsible for environmental education, who underlined the importance of implementing energy saving programs in all schools, not only
those of the municipality of Athens.

The director of secondary education Ioanna Psina, was represented by Kostis Kontogiannis. Ioanna Psina expressed her belief that students, through their participation have realised in a great extent the importance of climate protection.

Hilde Schramm, on behalf of the German citizens’ initiative “Respect for Greece” (RfG), partner of the project, referred- among other issues- to RfG’s contribution in conceiving the idea of the project and promoting the cooperation between Greece
and Germany in climate protection issues.

Nikos Chrysogelos, on behalf of the Social Cooperative “Wind of Renewal” instead of greeting, called a group of children and together loudly said a slogan in favor of climate protection. 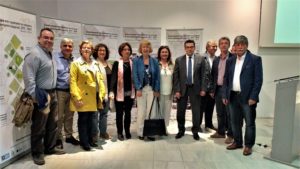 The next part of the event included a short presentation of the implemented training of teachers, from the coordinators of Education for Sustainability, Achileas Mandrikas and Christina Papazisi.

The event concluded with a round table discussion of students and teachers, who presented their experience. In the round-table participated the students: Ilias Mathioudakis, Aggelos Asimakopoulos, Rafail Papoulias and Rania Stavrelopoulou and the teachers: Panagiotis Lazos and Vasiliki Ioakimidou.

On Friday 17th May 2019 approximately 1300 students and teachers, together with the Vice Mayor for the Child, Maria Iliopoulou and members from Respect for Greece, participated with great enthusiasm in a march for climate at the Dionysiou Aeropagitou pedestrian street, as part of the “OPEN SOCIETIES AND SCHOOLS IN CLIMATE PROTECTION AND ENERGY TRANSITION (CLIMATE SCHOOL Be.At)” project. The march, accompanied by the Municipality of the City of Athens band, ended at “Technopolis” complex of the Municipality of Athens where the students were devided according to their school class and read out loud their resolutions, which were afterwards handed to the Municipal authorities.

All participants were awarded by the vice-Mayor for the child, Maria Iliopoulou and the Mayor of the City of Athens, Giorgos Broulias. The 54th and 130th primary schools of Athens presented songs they had prepared. After the award ceremony, students and teachers visited the exhibition of the student works related to the climate initiative, while a delegation of students, accompanied by two teachers talked about their experience and the need for raising awareness at the “Dames Spathi” radio show of the Municipality of Athens radio station, Athina 984fm. 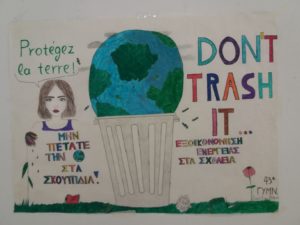 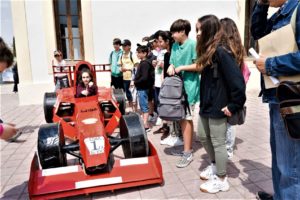 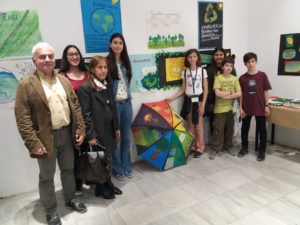 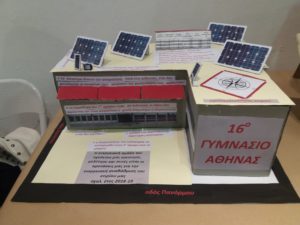 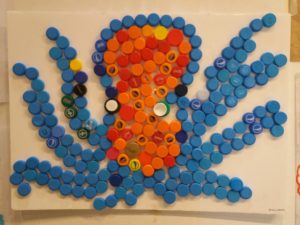 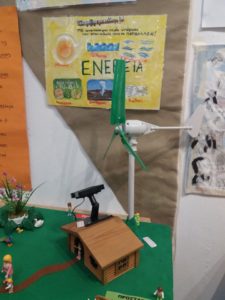 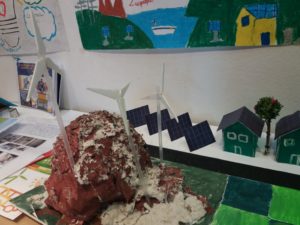 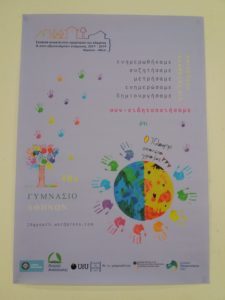 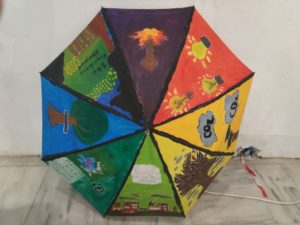 The project participants:
The Municipality of Athens and the Social Cooperative Company “Wind of Renewal”, the German citizens’ initiative “Respect for Greece, RFG and the German “Independent Institute of Environmental Issues” UFU. 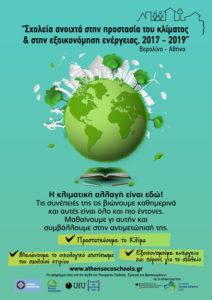 The program is implemented under the auspices of the Ministry of Education and aims at saving energy in school buildings and raising awareness of students on climate change.

73 schools and 200 teachers of Athens Municipality schools participated in the project.

This project is part of the European Climate Initiative (EUKI). EUKI is a project financing instrument by the German Federal Ministry for the Environment, Nature Conservation and Nuclear Safety (BMU). The EUKI competition for project ideas is implemented by the Deutsche Gesellschaft für Internationale Zusammenarbeit (GIZ) GmbH. It is the overarching goal of the EUKI to foster climate cooperation within the European Union (EU) in order to mitigate greenhouse gas emissions.’

The opinions put forward are the sole responsibility of the author (s) and do not necessarily reflect the views of the Federal Ministry for the Environment, Nature Conservation and Nuclear Safety (BMU).

The events were implemented with the cooperation of the Athens Municipal Radio Athens 9.84 & Arcoiris.

The events were hosted by Technopolis of the Municipality of Athens 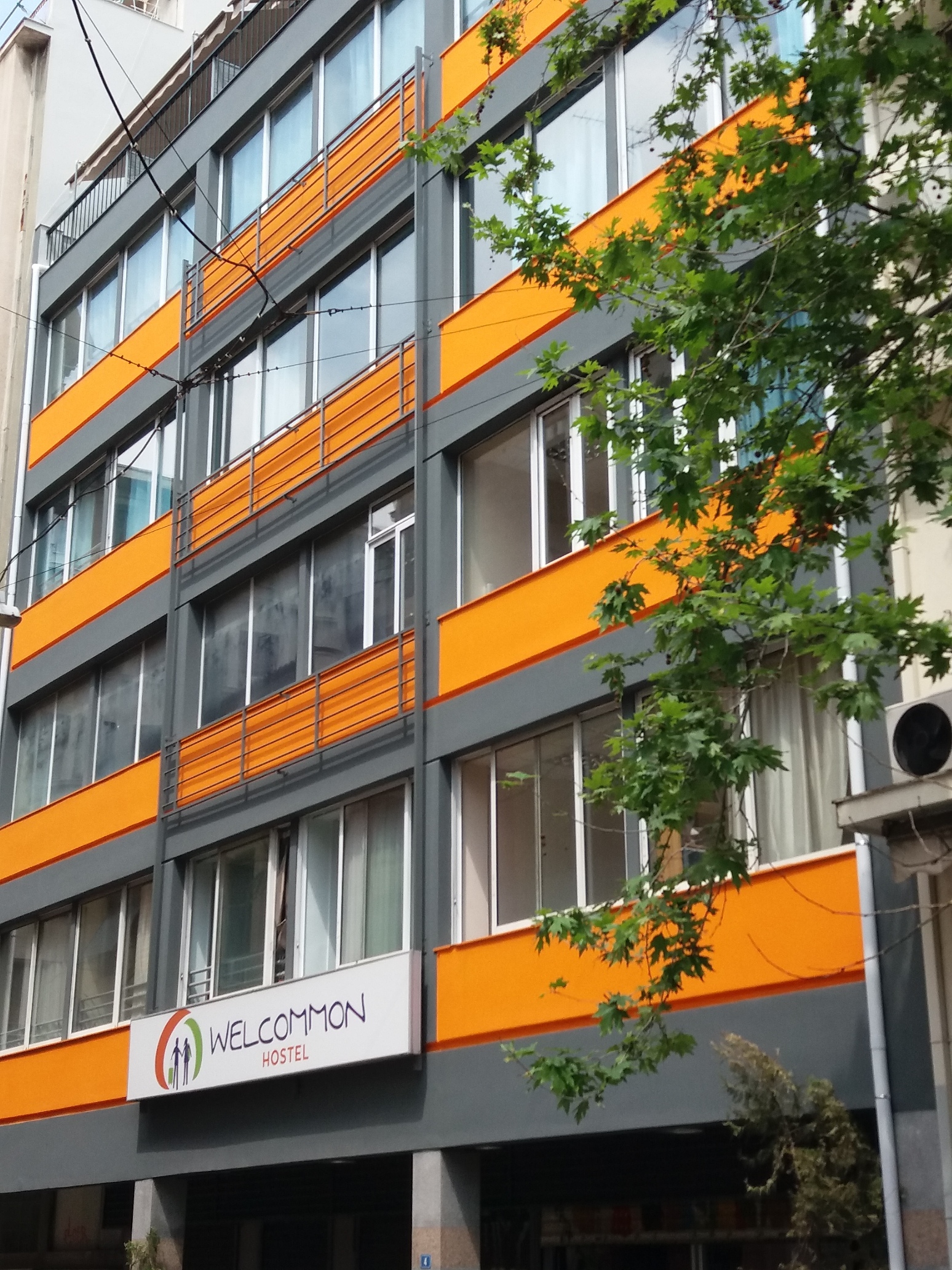 THE ART OF TRAVELING LIGHT: TOURISM WITH A POSITIVE IMPACT

THE ART OF TRAVELING LIGHT: TOURISM WITH A POSITIVE IMPACT