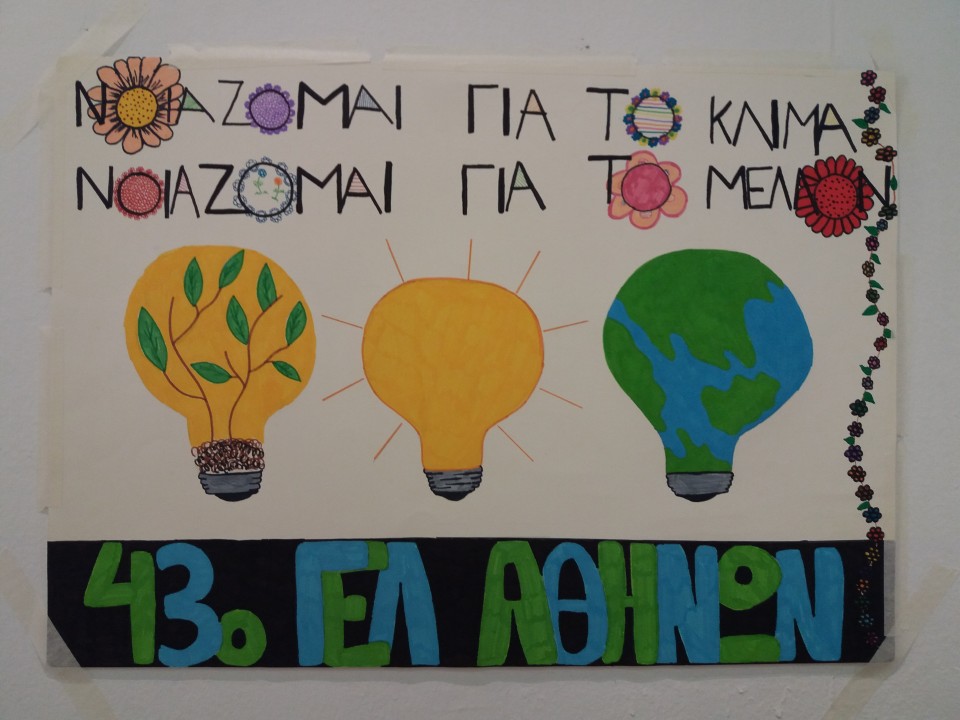 Thousands of students from 72 schools of Athens alongside with their teachers and parents expressed their commitment to climate protection. This commitment includes an integrated activity of information, education, training, awareness, research and provision of educational methodologies and tools which constitute the basis for future actions. The success story of the EUKI project “SCHOOLS OPEN TO CLIMATE PROTECTION AND ENERGY SAVINGS Athens – Berlin’’ #climateactionnow #climateaction #climateemergency #climateschoolsBeAth #education #energytransition #Athens #climateschools

Thousands of students from 72 schools of the Municipality of Athens alongside with their teachers and parents expressed their commitment to climate protection participating in the project ‘’SCHOOLS OPEN TO CLIMATE PROTECTION AND ENERGY SAVINGS Athens – Berlin’’ supported by the “European Climate Initiative”. This commitment includes an integrated activity of information, education, training, awareness, research and provision of educational methodologies and tools which constitute the basis for future actions.

The aforementioned project, lasted from October 2017 to January 2020 and aimed to the complicity of the school community in climate protection. The main target of this project was, not only the energy footprint reduction of school buildings, but also to raise students/teachers/parents awareness and knowledge in the subject of energy savings and climate protection.

This project used the existing experience as it emerges from environmental educational programs both in Greece and Germany. It also propelled a more comprehensive approach which is the basis for future continuation and expansion of the project in schools:

·        Institutions with various experiences and roles, from the two countries, collaborated in the project, adding their own know-how: The Municipality of Athens as coordinator, the social cooperative enterprise “Anemos Ananeosis /Wind of Renewal“, the German “Independent Institute for Environmental Issues / UnabhangigesInstitut fur Umweltfragen’’ (UFU) and the German Citizen’s initiative “Respect for Greece“.

·        They also edified in climate issues by Greek and German trainers who already had significant experience from similar projects.

·     20 trainers then trained 240 teachers, of whom 197 took an active role in their school. In total 72 primary, secondary and high schools have supported their students in this program and posted the necessary ‘’testimonies’’ on a digital platform called “moodle“. This platform will be accessible to all members of the educational community who want to implement similar actions in the future.

·     The educational community was supported for the entire school year 2018-2019, with methodological, educational information and tools. In addition, “energy suitcases/ tool boxes’’ have been given to them in order to apply the knowledge they gained in practice. More specifically, these “energy suitcases” included tools of measurement, observation and experimentation, thus combining different tools of environmental /climate education.

·     The students were informed, sensitized and turned into active researchers, surprising all the participants for their commitment and interest. Their work was captured on both posters and rich material posted on the digital platform moodle.

·        The students, teachers and school units participated in a relevant research that evaluated the implementation and catered, with good practices and suggestions, the project’s final Action Plan for interventions in the school.

·        Last but not least, the project was a useful tool for intercultural education and inclusion of all the pupils, greeks and the ones with migrant and refugee backgroud, offering different roles and tasks to all of them based on their interest, skills and capacities, enhance the community building approach.

The imprint of the program not only in the educational but also in the wider community, constituted a legacy for future actions and projects:

·        A website with all the necessary information and educational materials that are generally useful for the project.

·        An educational guide on energy saving and climate change was part of the students’ training.

·     A well-organized Action Plan for the Municipality of Athens usable in all its schools.

·        A research on the application of the project in schools.

·        72 pilot projects were implemented in the framework of the project and will continue that have implemented this program and are willing to continue.

·        Posters that capture their work (e-book of school posters)

·        A digital moodle platform on which all participating schools posted their work. In the future, this platform will be maintained and enriched by the work of other schools.

The 5 smart pilot schools of the Municipality of Athens are the first in Greece with artificial intelligence, providing the opportunity to:

·     Record the energy consumption from electrical appliances and lighting fixtures.

·       Manage energy based on an environmental perspective.

·     Provide security and comfort to teachers and students.

The majority of the participating teachers (both in primary and secondary education) and schools’ communities have expressed great interest to work on the axis of the project and achieve energy saving at school, improve factors that affect the quality of their daily life at school (such as the air quality in the classrooms) and deepen their understanding and awareness on climate change. The senior experts were in contact with the schools’ communities on a daily basis and they supported them in technical issues (i.e the use of the equipment) as well as educational (i.e. provide support in school events, propose educational ideas etc).

Some of the good practices that took place at the participating schools are as follow:

●     The use of interactive methods of learning as well as of the tool-box makes the implementation of the project more interesting for the pupils. The project was different from other similar projects for climate awareness. “Climate Schools Ath.Be” project methodology is integrated and includes: collaboration between different partners in a more coherent way, training of trainers and exchange of good practices, collaboration between Greek and German experts for the production of an educational material and a methodology based on different experiences in both countries, training of the researchers and practical use of the tools (material, tool-box with appliances, assistance to the teachers etc).

●     In several schools (esp. primary schools) students from the energy group conduct regular inspections during the breaks. They visit all the classrooms keeping notes on the users behavior (i.e. check if the lights are off, if the windows are open for ventilation etc). Then they make proposals to the users in order to change their habits. It is very inspiring that the energy inspection is implemented by school-mates, not by a third party.

●     Students that participate on the project become ambassadors at their school for climate protection and climate action. They are responsible to raise the awareness on climate issues of the rest of the students via presentations on climate change and energy saving. Also they present them the equipment and guide them in using it.

●     Several schools organise student contests in order to create the symbol of the school for energy saving. The students participated and draw several symbols.

●     The energy groups have printed symbols that evaluate the users’ behaviour (i.e happy and sad face). In case of good evaluations they provide the users specially designed praises.

●     Many schools are progressively replacing their fluorescent lamps to LED in order to save energy.

●     The teachers have formed working groups and they exchange technical knowledge and educational tools in order to raise awareness. Some of them make weekly coordination meetings.

We have learned a lot from the interaction with the schools’ communities (both from primary and secondary education) that participated in the project:

●     Pupils are able to find and formulate valuable information with the use of the project suitcases as: deficits in lightning, condition of air / ventilation, too warm and too cold areas, windows’ problems. Even a rough analysis done by engineers would not find all of this specific problems.

●     Pupils enjoy to explore the scientific background of their living conditions. In the secondary schools they can learn a lot on computing, digital technology, correct metering and data analysis.

●     Automatic controls in some cases don’t fit in the real situation and this could be changed.

●     Workshops for instruction and explanation of the technical equipment and physics helps the user/housekeeper to operate the systems in a more economic plus comfortable way and to recognize in which cases the help of the building department is needed, saving time for both.

●     A general system of energy management (calculating the amount of real energy consumption) would be helpful for all stakeholders of the project – for pupils and their activities, as well as housekeeper and Buildings Department.

Some special issues that were raised are:

●     Some students with learning difficulties or of different cultural background (eg refugees) were attracted by the special equipment and they showed great interest to participate more and take responsibilities (i.e become “responsible” to teach the rest of the class on the use of the instruments) or/and be active member of the team (intercultural dimension)

●     Some of the participating schools host a great percentage of migrant students. These students in general have learning difficulties especially because of the language barrier. In several such cases the migrant students showed great interest on the use of the equipment which acted as a way to incorporate them more in the project.

The project ‘’Schools Open to Climate Protection and Energy Saving, Athens-Berlin’’, was evaluated and selected for funding by the European Climate Initiative (EUKI), which is a funding instrument of the German Ministry of the Environment, Nature Protection and Nuclear Safety (BMUB). While it is also under the auspices of the Hellenic Ministry of Education, Research and Religions.

The details of the project implementing bodies:

What is the European Climate Initiative (EUKI)

The European Climate Initiative (EUKI), reinforces the cooperation in a European level and aims to increase knowledge and awareness about the causes of climate change, as well as the ecological, economic and social opportunities linked to climate action. The German Ministry for Environment, Nature Conservation and Nuclear Safety (BMU) established the European Climate Initiative (EUKI) to cooperate even closer in the development and implementation of EU climate policy. Through EUKI, climate actors can learn from each other; the initiative supports inner-European dialogue, the exchange of good practice, awareness raising, and knowledge transfer. 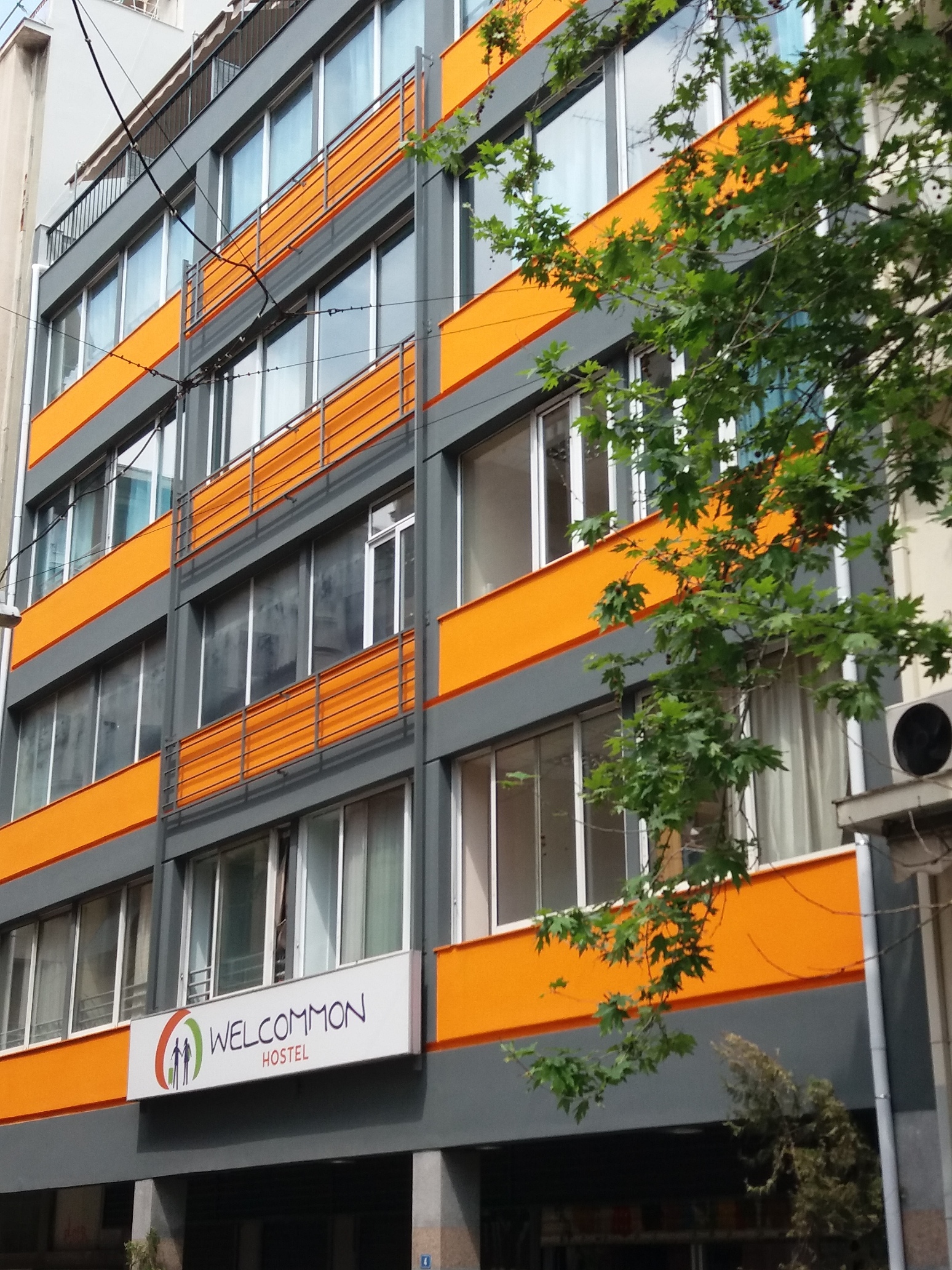 HOSTELWORLD: Welcommon Hostel, one of the “Hostel Heroes”

HOSTELWORLD: Welcommon Hostel, one of the “Hostel Heroes”